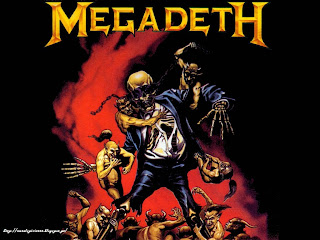 
"Droogies, I wanted to check in with you as I get ready to start tracking my 14 Megadeth record. For some of you that are new fans; the word 'Droogie' may seem a strange way to start a letter, but it means 'friend' supposedly in Russian slang. I got the idea to call you that from watching 'Alex' from 'A Clockwork Orange' call his two co-conspirators that. So, now you know I ain't calling you 'druggies.' Onward to the update.

Last Thursday I went to see an ENT (ear, nose, and throat Doctor), to find out the status of the damage to my vocal chords that they discovered prior to my surgery, and my neck from after the surgery. I was told during the first MRIs that I had a cyst or something on my vocal chords, and I didn't give it anymore thought, because the fusion was way more important.

I still find it laughable that someone I know said I was a pussy while lying in an ER awaiting spinal surgery for contemplating cancelling the BIG 4 show in NYC. I guess the old saying, "You spot it - you got it!" applies here. Except I don't want to offend our female fans by comparing this excrement to a body part of theirs. I walked away from the surgery, which was done after the concert (who's the pussy now?) and was a complete success, thinking I had nodes or polyps or something, and I wanted to wait until a year after the surgery to go get checked, because I just didn't want to go under the knife again that soon, if of course I had too. Thank God I don't.

Fortunately, if you can say that, my problem with my vocal chords is treatable, and it is just a matter of exercise, diet, and eating habits. I started drinking Aloe Juice, taking a tablet for my stomach, and I have to cut out some things I like. Coffee is one of things, but since I am not a cheerleader for overpriced - overrated Starbucks, like Thor and Junior, I am not taking this too hard. I am bummed about no chocolate (I love chocolate!), and tomatoes (no spaghetti or pizza), but I am loving this Countdown 20th Anniversary tour, and with the new record starting next week, singing is more important to me than ever.

Thanks for all of your support through this whole ordeal, and I really, really look forward to seeing you at some point before the end of the year. Check out our support band Kyng and lemme know what you think. I like 'em and I hope you will too. Here's to a great fu...., erm, a great flipping new record and tour!"